Speech development is affected in children with autism, and related Autism Spectrum Disorders. Some may remain mute throughout their lives, though possibly communicating in other ways - images, visual clues, sign language, or typing on a keyboard. Those on the more severe end of the autism spectrum who do speak sometimes use language in unusual ways, retaining features of earlier stages of language development for long periods, or throughout their lives. Some speak only single words, while others repeat a phrase over and over. Some repeat what they hear, a condition called echolalia.

In milder cases on the autism spectrum, there can be problems in social interaction with peers. Children with Asperger's syndrome may be bullied at school due to their idiosyncratic behavior, interests, and impaired ability to perceive and respond in socially expected ways to nonverbal cues. They may also be extremely literal and have difficulty interpreting and responding to sarcasm or banter.

As with many so aspects of autism, PDD-NOS and Asperger's syndrome, early intervention is required to minimize the delays in a child's communication skills. The following fact sheets provide useful strategies for children on the autism spectrum.

Social exchange theory for parents of autistic children
Communication issues & Asperger's
Ten common roadblocks when beginning a home program
Introduction to Theory of mind - not seeing the world from another's perspective
Research into Theory of mind
Mind-blindness - the inability to know what others are thinking
Should we insist on eye contact?

Autism Spectrum Disorders & schooling
Genius may be an abnormality
Education, autism and inclusion: a myth?

Behavioral issues in the class room

Sensory issues in the class room

By age three, typical children have passed predictable language learning milestones; one of the earliest is babbling. By the first birthday, a typical toddler says words, turns when he or she hears his or her name, points when he or she wants a toy, and when offered something distasteful, makes it clear that the answer is "no." It should be noted, however, that late language development does occur in a minority of neurotypical children.

Speech development in people with disorders like autism and PDD-NOS takes different paths than the majority of neurotypical children. Some remain mute throughout their lives with varying degrees of literacy; communication in other ways — images, visual clues, sign language, and typing may be far more natural to them. Contrary to the prevailing traditional stereotype of mute people with Kanner-type autism, around one third of people diagnosed with this type of autism will develop what is often viewed as dysfunctional verbal language, relying on rote learned stored phrases, songs, jingles and advertisements. Those with the autism spectrum condition of Semantic Pragmatic Disorder fall into this group.

Those who do speak sometimes use language in unusual ways, retaining features of earlier stages of language development for long periods or throughout their lives. Some speak only single words, while others repeat a mimicked phrase over and over. Some repeat what they hear, a condition called echolalia. Sing-song repetitions in particular are a calming, joyous activity that many autistic adults engage in. Many people with autism have a strong tonal sense, and can often understand at least some spoken language whilst others can understand language fluently.

Some children may exhibit only slight delays in language, or even seem to have precocious language and unusually large vocabularies, but have great difficulty in sustaining typical conversations. The "give and take" of non-autistic conversation is hard for them, although they often carry on a monologue on a favorite subject, giving no one else an opportunity to comment. When given the chance to converse with other autistics, they comfortably do so in "parallel monologue" — taking turns expressing views and information. Just as "neurotypicals" (people without autism) have trouble understanding autistic body languages, vocal tones, or phraseology, people with autism similarly have trouble with such things in people without autism. In particular, autistic language abilities tend to be highly literal; people without autism often inappropriately attribute hidden meaning to what people with autism say or expect the person with autism to sense such unstated meaning in their own words.

Some people with high-functioning autism demonstrate advanced cognitive ability, but lack the skills or are not inclined to interact with others socially. An example of the this is the noted autistic Temple Grandin, who holds a PhD and is a successful developer of livestock handling technologies. She describes her inability to understand the social communication of neurotypicals as leaving her feeling "like an anthropologist on Mars." Temple's case was described by neurologist Oliver Sacks in his 1995 book titled "An Anthropologist on Mars: Seven Paradoxical Tales."

Some infants who later show signs of autism coo and babble during the first few months of life, but stop soon afterwards. Others may be delayed, developing language as late as the teenage years. Still, inability to speak does not mean that people with autism or Asperger's syndrome are unintelligent or unaware. Once given appropriate accommodations, some will happily converse for hours, and can often be found in online chat rooms, discussion boards or websites and even using communication devices.

Sometimes, the body language of people with autism can be difficult for other people to understand. Facial expressions, movements, and gestures may be easily understood by some other people with autism, but do not match those used by other people. Also, their tone of voice has a much more subtle inflection in reflecting their feelings, and the auditory system of a person without autism often cannot sense the fluctuations. What seems to non-autistic people like odd prosody; things like a high-pitched, sing-song, or flat, robot-like voice may be common in autistic children and some will have combinations of these prosody issues. Some autistic children with relatively good language skills speak like little adults, rather than communicating at their current age level, which is one of the things that can lead to problems.

Since non-autistic people are often unfamiliar with the autistic body language, and since autistic natural language may not tend towards speech, autistic people often struggle to let other people know what they need. As anybody might do in such a situation, they may scream in frustration or resort to grabbing what they want. While waiting for non-autistic people to learn to communicate with them, people with autism do whatever they can to get through to them. Communication difficulties may contribute to autistic people becoming socially anxious or depressed or prone to self-injurious behaviors. Recently, with the awareness that those with autism can have more than one condition, a significant percentage of people with autism are being diagnosed with co-morbid mood, anxiety and compulsive disorders which may also contribute to behavioral and functioning challenges. 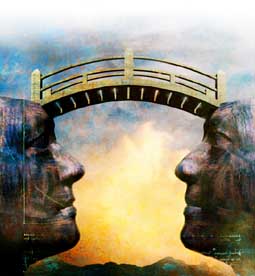 Both Autism and Asperger's syndrome will create a variety of communication issues for children on the autism spectrum.